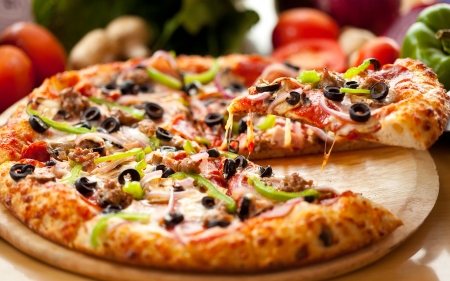 9 Authentic Italian Pizza You Must Know (and Try!)

Pizza may be a national food of Italy but there is no national pizza of Italy. Consensus is limited to a single point: My pizza is better than yours.

Support for a local pizza style can be ingrained. No kind of pizza is quite like the one you grew up with. That’s maybe why some Australians feel conflicted about the pizza they try in the old country. So what if Sicilian pizza in Palermo is more authentic than its Italian-Australian adaptation in Sydney? It’s not quite their pizza.

Such loyalty is laudable but it is also limiting. Your first pizza love is not necessarily your best and it doesn’t have to be your last. No virtue points are awarded for pizza monogamy, or for limiting your relationships to a single body shape, such as square and top-heavy.

In Italy, where exceptional pizza comes in several styles, the last thing you want to be is typecast. Here’s how to navigate pizza polyamory in Italy. 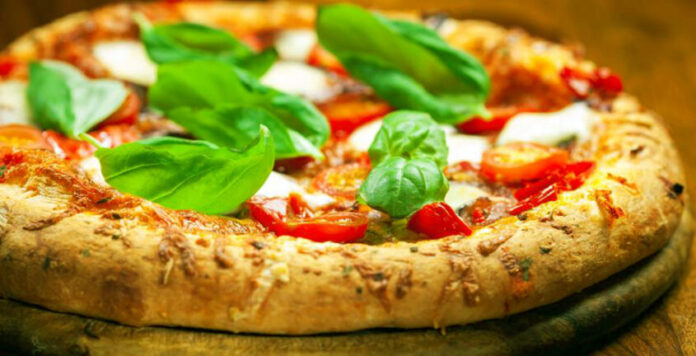 Naples shared its love of pizza and dry pasta with the world but something got lost in translation. Rather than eat pasta al dente and pizza soft, the Neapolitan way, foreigners learned to do the opposite. Italians, too, developed a preference for pizza that cracked under pressure. When Giovanni Santarpia first brought true Neapolitan pizza north to Tuscany the locals did not leave bottles of wine at his doorstep in gratitude. They desired, as he tells it, thin pizza as crisp as biscotti.

The softness of the true Neapolitan pizza crust partly comes from its being cooked in a 900℉ wood-fired oven. The air bubbles in the dough—pushed outward by the skilled pizzaiolo to form the cornicione (rim) of the pizza base—swell, char and blister before the interior crumb has dried out and hardened. But the dough itself is built to be elastic, able to cradle the prized tomatoes and mozzarella of the Campania region in a loving fold. “The sensations you get from eating a soft and well-leavened pizza are different,” says Santarpia. “You feel all the flavors in one bite.”

Soft-core pizza has finally developed a hardcore following in areas as remote from Naples as, well, Florence: The lines for classic pizza napoletana extend outside Santarpia, Giovanni’s new pizzeria, nearly every night.

Roman-style pizza al taglio (“by the cut”) is baked in sheet pans and sold by the slice, hence the alternative names pizza in teglia (“pizza in the pan”) and pizza al trancio (“pizza by the slice”). You order as you would in a cheese shop, making your selection from the display case, telling the server how much to cut off and paying by the weight. Back in the day a Roman kid’s afternoon snack was ordered as ‘na piotta di pizza – slang for “100 liras worth of pizza”.

Pizza al taglio bakes in an electric oven for up to 15 minutes, yielding a crisp, airy, golden crust that’s up to an inch thick. The longer cooking time isn’t always ideal for toppings. To prevent overcooking or unnecessary cooking some of these pizza accessories are applied mid-bake or after-bake. Why such precautions for so humble a street food? Because pizza al taglio, at its best, is a platform for the some of the most prized cheeses, cured meats, seafood, produce and, yes, baking in Italy.

The dough for “pizza by the cut” doesn’t even have to be molded in a pan. Some is baked directly on the stone surface of the oven and goes by the description pizza alla pala (see below). 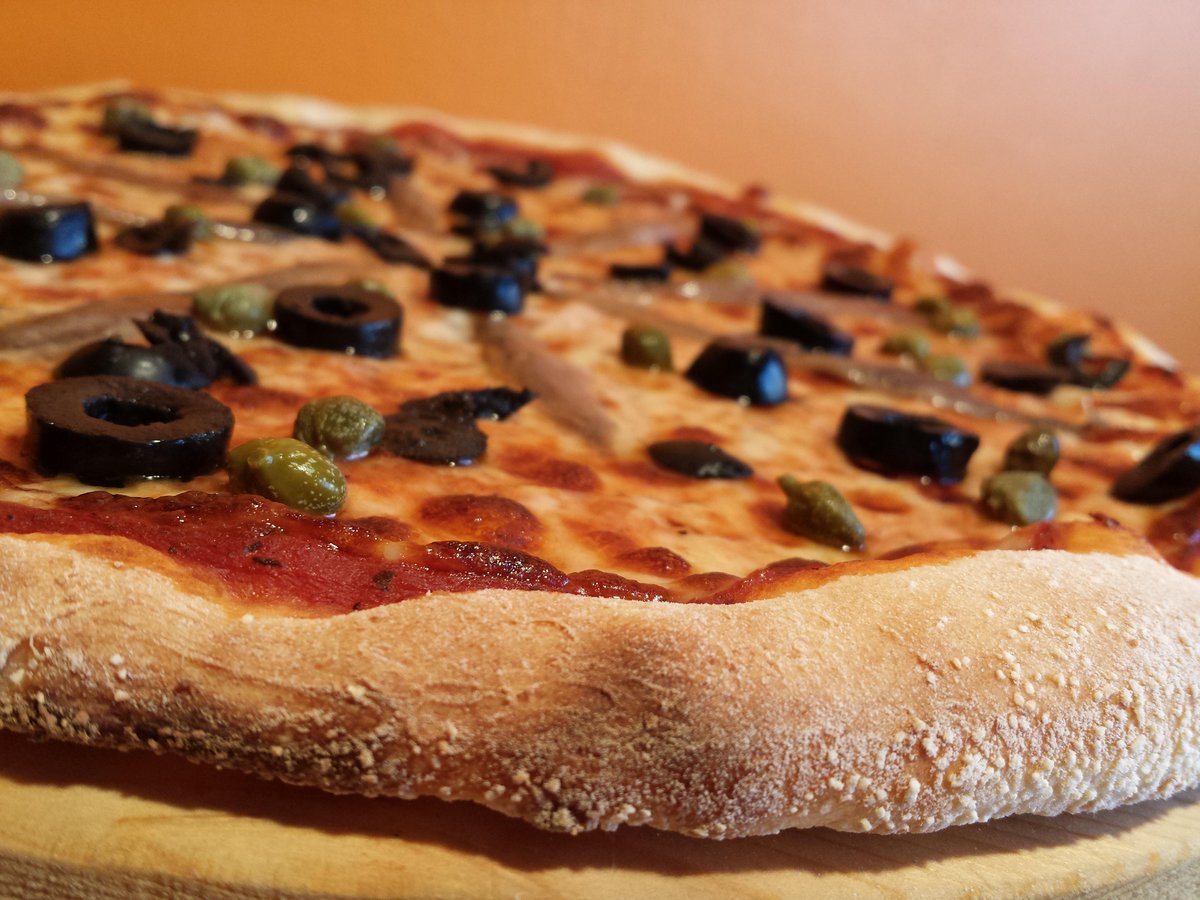 In the USA, “Sicilian” is sometimes synonymous with “square,” the shape of the pan pizzas prepared by Sicilian immigrants and their descendants in Boston, Providence, New York and Detroit. These New World pizzas were probably inspired by sfincione of Palermo or cudduruni of Syracuse, two types of Sicilian pizza typically sold in bakeries and likened, on account of their breadiness, to Sicilian focaccia. These pizza squares may also be precursors to pizza al taglio.

Even so, when you order pizza in most areas of Sicily you usually get one round pie or, in the case of a stuffed pizzolo, two round pies stacked atop one another. The term pizza siciliana is defined less by shape than by local ingredients: Semolina and other home-grown grains in the dough; toppings of goat cheese, pecorino siciliano and local cow’s milk cheeses – anything but buffalo mozzarella. Anchovies are everywhere. A dusting of breadcrumbs is another pretty reliable indicator. 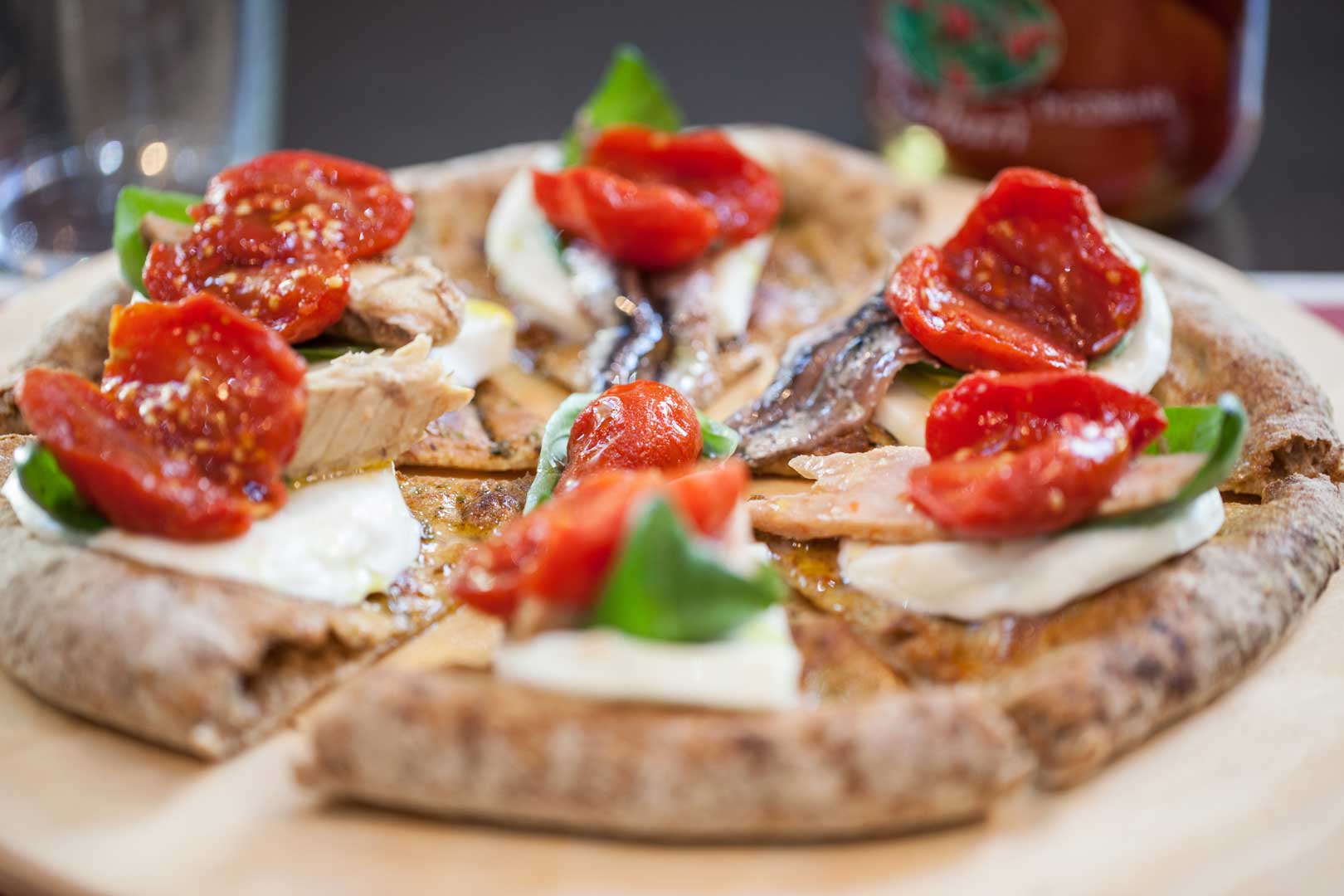 “Gourmet” is a broad label for a new ethos lifting pizza to the standards of haute cuisine. The two gentlemen of Verona– Simone Padoan of I Tigli and Renato Bosco of Saporè–construct their pizzas bit-by-bit as a Michelin-starred chef would a dish. You’ve heard of tweezer food? These are tweezer pizzas, often cut into flawless little triangles seen as revelations by their champions in the food press, or as abominations by pizza purists who are put off by the fussiness and who regard ‘gourmet’ as a word for snobs.

Bosco doesn’t care for the word ‘gourmet’ either. “For me the correct term is pizza contemporanea,” he says. “Pizza evolving not only in terms of the cooking, but also for the choice of raw materials and for the study of leavening.”

With their fanatical focus on wholegrain flours, ancient grains and sourdough starters, the gourmet pizza geeks are very much part of the craft baking movement. The obsession with sourcing runs deep. What distinguishes them from their American counterparts is a willingness to play with various doughs and blur the lines between a beautiful pizza and an artisanal bread with fancy toppings: Bosco’s celebrated Aria di Pane is a golden fluff of both. 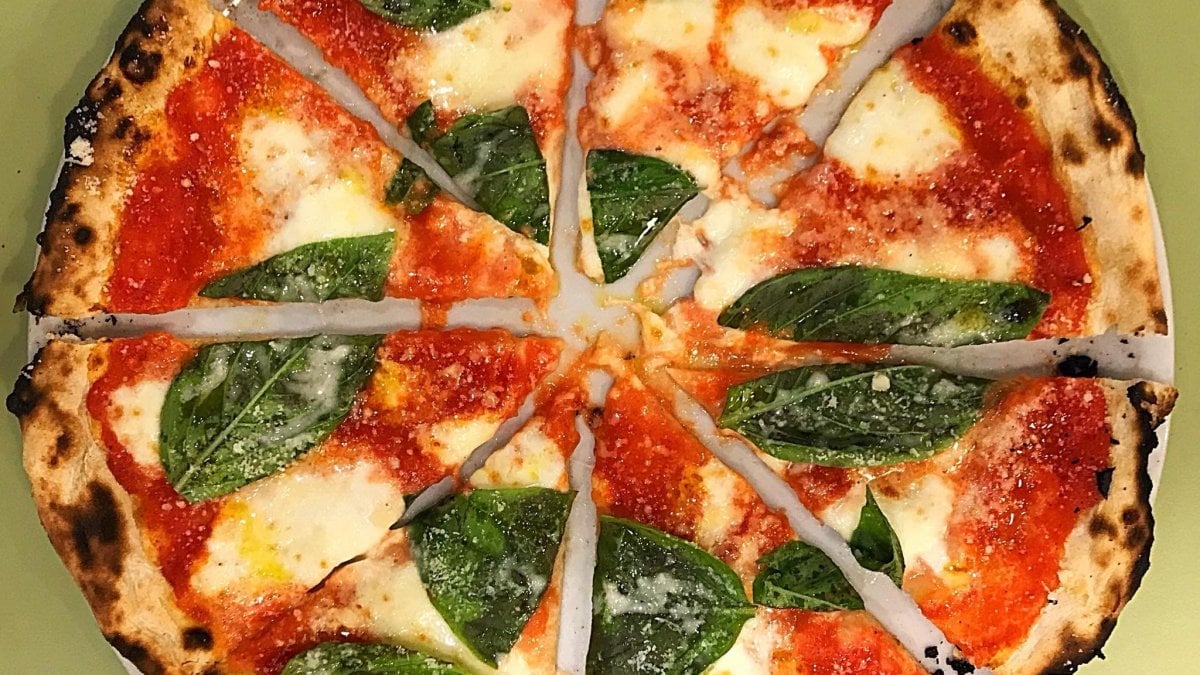 In 1492, Christopher Columbus convinced all that the world was round, not flat. Devotees of pizza romana tonda view the world as round AND flat. Whereas Neapolitan pizza is floppy and bendy, with a cornicione so inflated it appears to be on steroids rather than yeast, the round pizza of Rome has a crust that is exceptionally thin, ultra-crisp and self-sustaining. If you hold up a slice by its rounded end the point of the triangle will never sag. The crack that occurs when you try to fold a slice–a futile endeavor–is known as schrocchiarella and is a style unto itself.

If it’s taken some time for pizza fritta to captivate Italians outside of Naples, that may because deep-frying a food as starchy and cheesy as pizza might seem imprudent. The people in Scotland like deep-fried pizza but they eat deep-fried Mars bars, too, so there’s no telling.

That aside, pizza fritta is finally having its moment. Greasy street food is trendy, eating bread dough that’s been cooked in a big vat of hot oil has lost its stigma and, perhaps most importantly, pizza fritta looks freakin’ great on Instagram. What’s more, Neapolitan-style pizza fritta is a wonder of cooking science: You drop a circular or half-moon pouch of stuffed dough into the deep-fryer and watch it swell and change color. Out comes an exceptionally airy cocoon of golden goodness. Once opened it’s as if the fillings – ricotta, provola (smoked cheese), tomato, salami – have not been touched by a drop of oil. You almost don’t need napkins. Almost. 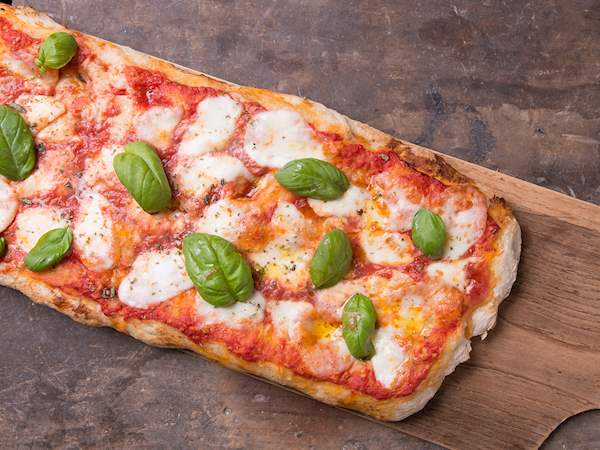 These are alternate terms for oblong pizzas baked directly on the stone floor of the pizza oven. Think pizza boards. The pizza a metro is sized according the number of people sharing it, up to a meter long, as its name – “pizza by the meter” – suggests. Pizza alla pala may be cut into square slices. Pala is Italian for “peel,” the long-handled shovel-like tool used to slide pizza in and out of the oven.

Texture and depth can vary, but in most instances these pizzas are crunchy and at least a half-inch thick. 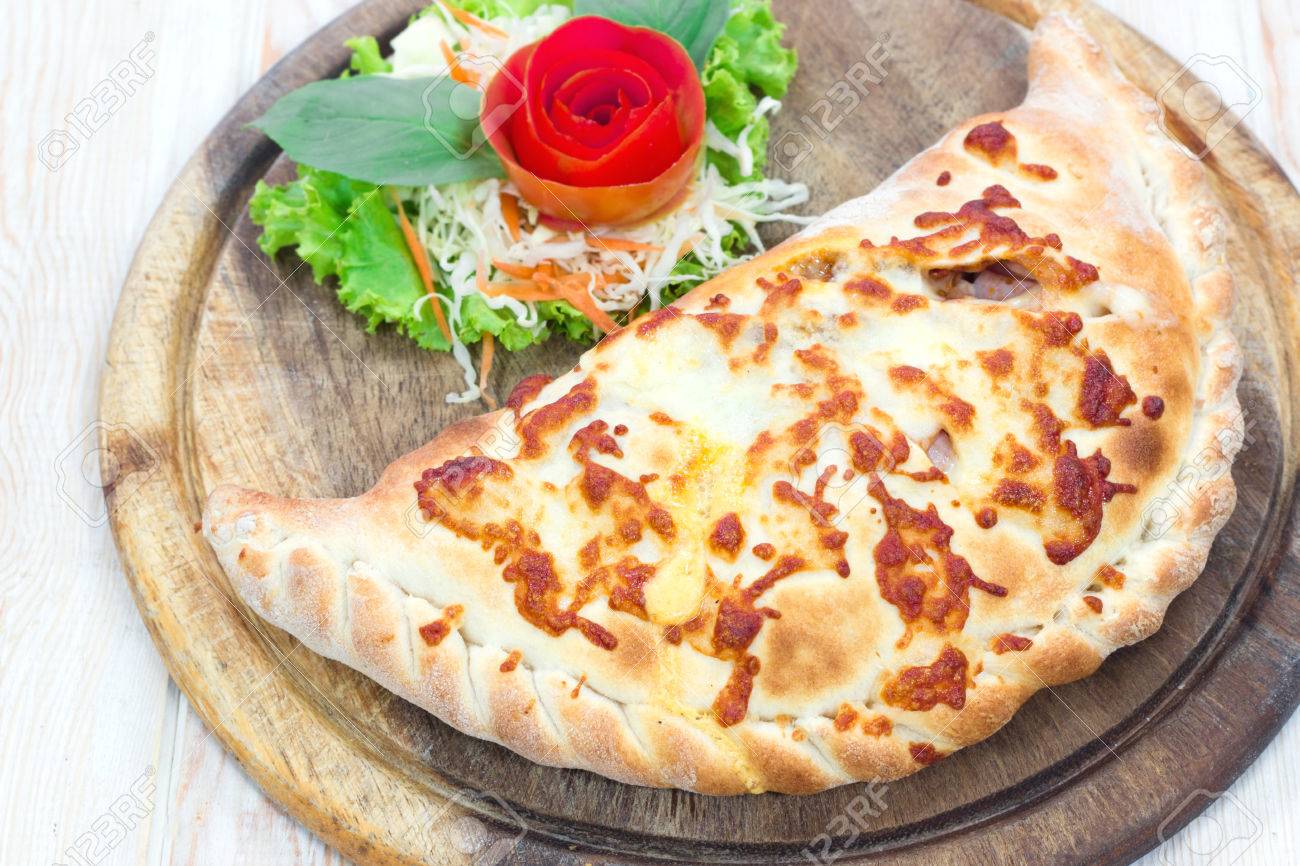 The practice of folding the pizza dough over itself dates back at least 150 years: In Usi e costumi di Napoli – “The Traditions and Customs of Naples,” calzone is listed as one of the main styles of pizza. (It is the third option, just after a flat combination pizza garnished with grated cheese, neck lard, basil and possibly also mozzarella, prosciutto or clams).

Recognizing calzone as a type of pizza doesn’t mean it should be prepared in the same way. Otherwise you might end up with five inches of crust around the border. “You spread out the dough as you would for a normal pizza,” advises master pizzeria Enzo Coccia of Pizzaria La Notizia in Naples, “but you don’t build up the cornicione.”

A calzone at its best doesn't have a thick, heavy barrier to entry. You want to break into the steaming ricotta, melty mozzarella and other delights from the pizza pantry as quickly and easily as possible. Believe it or not there is such a thing as a light calzone. 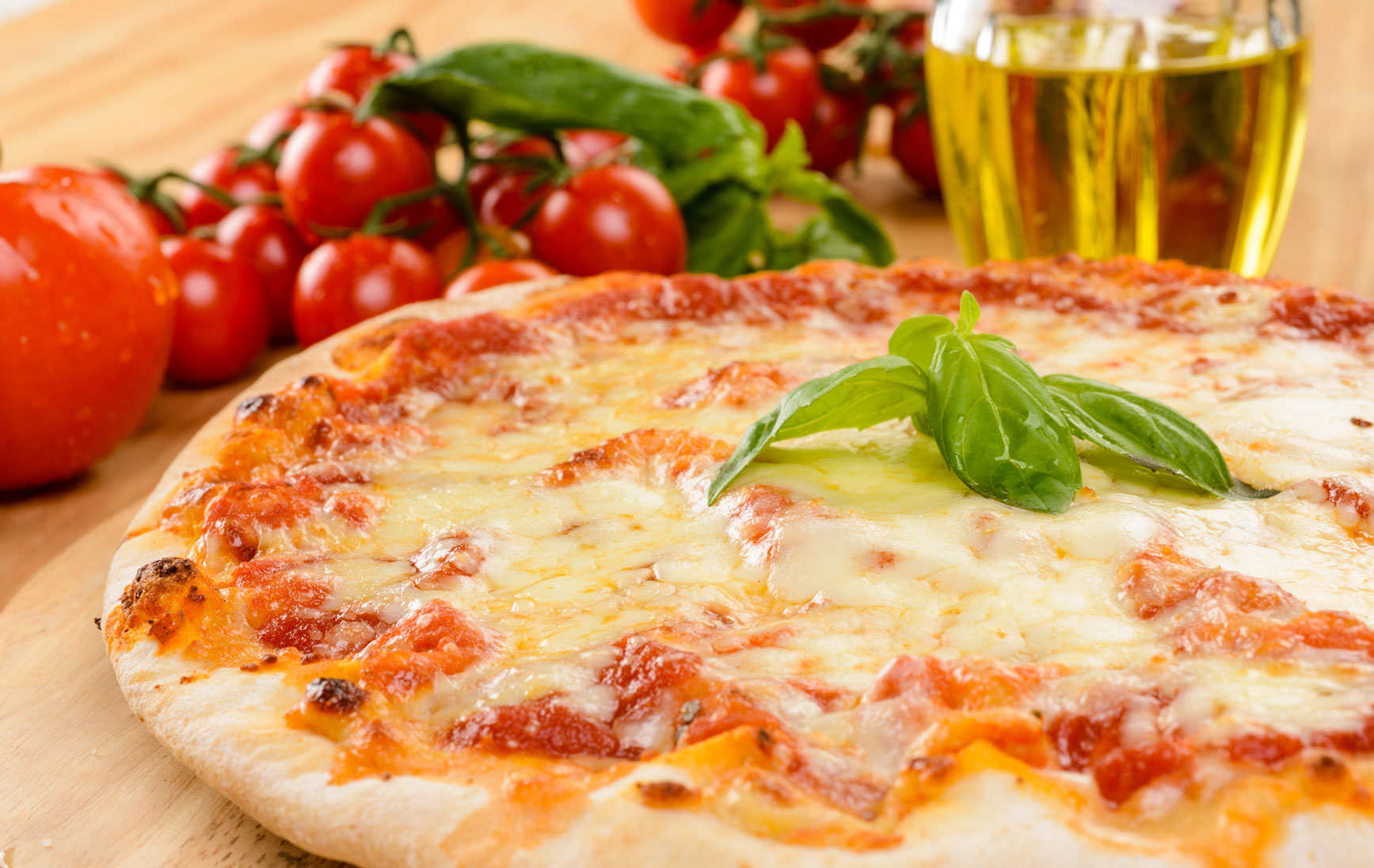 This is the none-of-the-above style. It may also be recognized as “classica”, “tradizionale” or, in the generic sense, “napoletana”. It’s pizza according to the Italian model, as opposed to the American one: Small size (about 12-inches). Thinner crust. Fewer toppings and less of them. Familiar pre-sets (Margherita, Marinara, Napoli, Quattro Stagione, Capricciosa) rather than design-your-own. No pepperoni. No chicken. No pineapple.

Southern Italians may equate the term pizza italiana with industrialized, fastfood or supermarket pizza, even if some is handmade with fresh ingredients and baked in a wood-fired oven. One of the highest words of praise for any pizza italiana is digeribile –“digestible.” With inferior pizza, the dough has often been rushed into service. The pizza leaves you with a bloated feeling lasting for hours. With good pizza the dough has had plenty of time to rest and ferment. It won’t hole up for the night in your gut.

When in Italy you generally don’t seek out pizza italiana. It finds you. With any luck it will be digeribile.

If you want to taste some of these pizza from an authentic italian pizzeria in australia, come to The Golden Crust restaurant in Baulkham Hills.

We make the best pizza you have ever tasted. 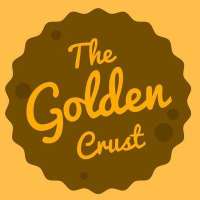 The Golden Crust is one of the best pizza place franchises in Sydney, NSW. Located in ...