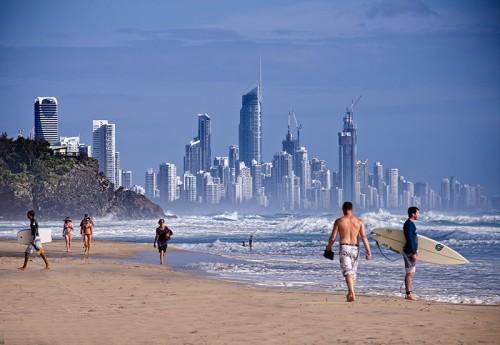 Surfers Paradise: Activities to do

Surfers Paradise has come a long way since 1936 when there was just the new Surfers Paradise Hotel, a little hideaway 9km from Southport. The hotel has been swallowed up by a shopping/eating complex called the Paradise Centre, one of several such developments that constitute the highly commercialised centre of this vibrant, if tacky, beachside resort. The popularity of Surfers Paradise these days rests not so much on the sand and surf (which is better down the coast) but on the shopping and nightlife and its proximity to attractions like the Gold Coast theme parks.

Aussie Bob’s, at the Marina Mirage in Main Beach, and Surfers Beach Hut Beach Hire, at the beach end of the Cavill Ave Mall, rent out a wide range of gear including jet skis, fishing boats and sailboards, and can take you parasailing, water-skiing and more. You can also sea kayak from the north end of The Spit to South Stradbroke Island, snorkelling en route and possibly encountering dolphins.

Bungee Down Under, on The Spit by Sea World. In Surfers, a former car park just off Ferny Ave is home to a bungee rocket, which is basically a giant catapult in which you take the place of the projectile. To be shot 50m into the air in one second and experience up to six times the force of gravity. There’s also something called a flycoaster and you get to play Peter Pan, swung from a hoist 20m up.

Off The Edge offers downhill mountain biking out in the hinterland forests. There are a variety of routes, from those for the timid to slopes for those with a death wish - and to cut out the tiresome bit a van takes you back uphill each time. The same company also offers a ‘triple challenge’, which begins with some trail biking, moves on to powerboating and then peaks with your choice of a bungee jump, jet ski or parasail.