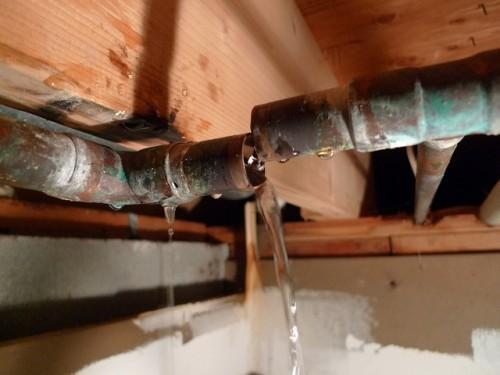 Because dripping water can cause damage and create an electrical hazard, even minor pipe leaks should be repaired promptly by a professional plumber. Until then, use one of the following methods to repair the leak temporarily. First, shut off the water supply to the pipe. Then remove any rust from the pipe with steel wool and wipe the area clean and dry. 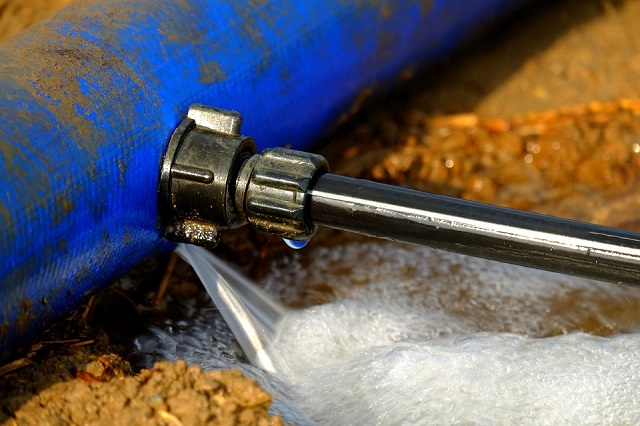 To seal a small crack or hole in a waste pipe, wrap layers of electrical tape around the pipe from one side of the leak to the other, extending the several centimetres either side.

For a small leak, wrap a rubber pad around the leak and cover it with a hose clamp. Or cut a tin can along its seam, wrap it around the rubber pad, and secure it with a G-clamp and two blocks of wood.

For a large leak, wrap a rubber pad or piece of split garden hose around the leak, cover it with a pipe clamp, and bolt or screw the clamp. Make sure the clamp is centred directly over the leak.

Hang a tag on the main shutoff valve so that family members will be able to identify it quickly and easily during an emergency.

If you hear a loud bang, called water hammer, when a tap is turned off abruptly, it's usually caused
by an airlock in the pipes. Because this vibration can damage pipes, check for a bent pipe and straighten it. If hammering persists, turn off the water at the main and open all taps. Turn on the main and leave taps flowing until the air is carried away.

If this ineffective, do not hesitate to call a Top4 affiliated plumber who specialises in repairing leaking pipes and other plumbing services.

Based in the Hills District, Asset Plumbing Solutions have been providing com...

President Plumbing has been the plumber in the Hills District, specialising i...