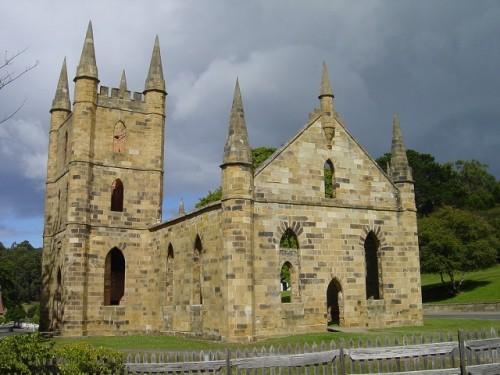 Tasmania's most visited tourist attraction is a melancholy as a cry of despair carved on the wall of a prison cell. Just over 100 km south-east of Hobart, the old penal colony of Port Arthur is a matter of an hour-and-a-half drive. There was no road in convict times, so the condemned and their keeper had to go by sea. Some 200,000 visitors per year make the pilgrimage to these relics of the nation's grim beginnings, deemed so important they're protected by the National Parks and Wildlife Service.

Port Arthur was founded in 1830 as a prison within a prison, the place to punish convicts in the second degree. Having been exiled to Tasmania for a first crime, some of the prisoners were convicted of new crimes on the spot. These really hopeless cases would be sent to Port Arthur as the last resort. Tough discipline was common in all penal institutions at that time, but Port Arthur acquired a reputation as the nadir of brutality. Chain gangs, encouraged by the lash, built the solid stone buildings which have survived more than a century of abandonment, earthquake, fire, storm and looting.

The biggest building still standing, four stories high, was designed to be a storehouse but became a penitentiary for 650 inmates. Other surviving buildings are the lunatic asylum and, next door, the "model" prison. Both have been restored. Convicts designed and built a large church, now in ruins. Its 13 spires represent Christ and the apostles. The church was never named or consecrated because it served several denominations, and also its record was marred by a murder committed on the premises during its construction.

Then there is the mortuary, which did a lively business nearly 2000 graves occupy the nearby Isle of the Dead, in the middle of the bay. Other than that, Port Arthur was almost escape-proof, with sharks waiting on one side and killer dogs on the other. In total, approximately 12,500 prisoners died at Port Arthur during its 47 years of operation.