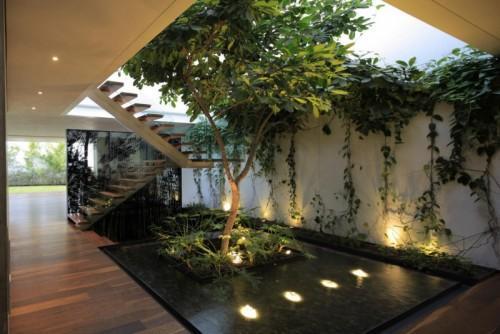 Natural Ways To Enjoy Good Air Circulation In Your Home

The heat is rising. What’s the first thing you’ll do? Most likely, it’s to turn on the air conditioning. But did you know that there are other ways to keep your cool? There are methods that focus on improving air circulation in your home through more natural means that are less reliant on energy consumption.

After all, air conditioner is expensive, and it will bloat the electricity bill especially if it’s running non-stop during the summer. If you want to cut costs without feeling like your innards are about to explode because of the terrible heat, there are a number of ways that you can do.

1. Sunlight out!
Sunlight increases the heat, especially in the middle of the day. There are a number of ways that you can keep the sun out. Here are some basic strategies.

● Close the curtains
Curtains can block the passage of heat even without closing the windows. When using curtains
though, use light colored ones as they reflect more sun, repelling the heat away from the house
and bouncing it back outside.

● Install awnings
Awnings can reduce heat up to 77 percent. Think of them as extensions of the ceiling, giving the
house much-needed shade. If the house doesn’t have awnings, it’s fairly easy to improvise. Tack
sheets over the window and tie the ends over a chair or other similar object that can put the sheets
in its place.

● Use shutters
As the name suggests, shutters can shut out the sun, aside from providing extra layer of security.
Shutters are pretty easy to install, and you can buy them in any size dimension, depending of the
size of your window.

● Use window film with high-reflectivity
Window films keep the room cool in summer. You can install them on the east and west windows.
Using one-way mirror-like films is better than colored translucent or semi-transparent films.

2. Maximise your windows.
Windows are not just installed for posterity. They have practical usage. When the air outside is cooling down, windows must be open because it will drive the hot air trapped within. If the house have facing windows, then both windows must be opened for cross-ventilation.

3. Use air circulation fans.
Unlike AC, fans don’t spew cold air. What they do is they drive the air in certain directions. Temperature decreases when the air is moving. Ceiling fans are more effective because it drives the air down, rather than sucks it up. If you want that ice-cold effect that AC delivers, you can place a bowl of ice in front of the fan.

4. Minimise use of appliances.
Appliances produce heat. Turn them off one by one when not in use and you can feel the temperature improving. Most people don’t even shut down their computers. Even if the monitor is off, it still produces heat. It’s best to turn them off completely. Reduce the use of steam-generating appliances like dryers, washers and ovens. Aside from cooling the temperature, it will greatly reduce your electric bill.

5. Plant trees and greens.
Plants and trees consume carbon dioxide and releases fresh oxygen in the air. Planting trees and vines on the south and west facing walls creates that greenhouse effect and does drives down the temperature. The shades alone offered by trees are often big enough to cover entire portions of the house, giving you a natural filter for the heat. Consider the trees that lose their leaves on fall and grow them again on spring. These types of trees will give you shade in the summer and sun in autumn. Native trees have better chance of surviving for a long time. Remember, you don’t want to plant the trees very near the house. Plot them with sufficient spaces in between, taking into account their growth in the years to come.