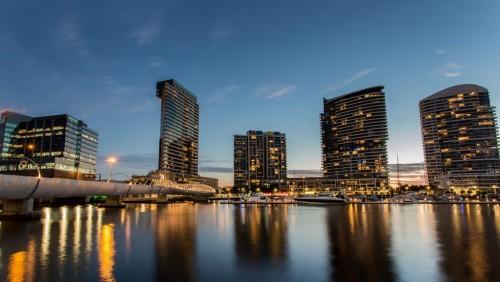 Start at Waterfront City, north side of Victoria Harbour’s newest developments in the expanding Docklands precinct. Tram 48 on Flinders St will take you all the way to Docklands Dr, or get off the free City Circle tram at the corner of Harbour anywhere along the city-fringe stretch of the Yarra to adjacent New Quay.

Walk to the great restaurants and cafes that line the northern edge of Victoria Harbour until you reach Harbour Esplanade. Then head south along the waterfront to Central Pier earmarked for a future landmark cultural building, which, for the time being, developers and government are remaining tight-lipped about. To the left towers the giant retractable distant Bolte Bridge. Continue south past the award-winning National Australia Bank building to Docklands Park. This park is home to some of the precinct’s excellent public art, including the contemplative Reed Vessel and whimsical Blowhole sculptures, next to a terrific children’s playground. Ahead is sinuous Webb Bridge, which includes the architectural motif of an Aboriginal eel trap in its design. The south bank of the river upstream from here is likely to be impeded by the construction of the new Melbourne Convention Centre for a while, so backtrack to Collins St and walk towards the city to reach Southern Cross Station, where trains clatter and hoot beneath the spectacular wavelike roof.

Turn right at Spencer St and walk down the hill past a contrasting landmark of the 1880s railway network, the former Victorian Railways headquarters, now the Grand Hotel. Cross Flinders St and walk beneath the railway overpasses and past the brutalist Melbourne Convention Centre.

From here, restaurants and cafes line the riverside promenade all the way to Swanston St. Beyond the casino is Queensbridge Square, a public square with a bold red amphitheatre. Angling across the river is the historic Sandridge Bridge, once apart of Melbourne's first railway line and now reborn as a pedestrian bridge over which the kinetic sculpture the Travellers marches, a tribute to Melbourne's immigrant personality. One hundred metres east and a block back from the river is Australia's tallest building, Eureka Tower. It's eclectic facade of blue-and-white panels, shimmering crown and splash of red evokes, the flag, gold spilled blood of the Eureka Stockade, the most epic citizen's rebellion. In its shadow is Southgate, the first Southbank project, with a wide range of eateries bustling with crowds fresh from a performance at the adjacent Victorian Arts Centre. Climb to the podium of Hamer Hall Princes Bridge to finish the walk at the stone-and-glass riot of Federation Square, increasingly embraced as the dynamic heart of ‘New Melbourne’.