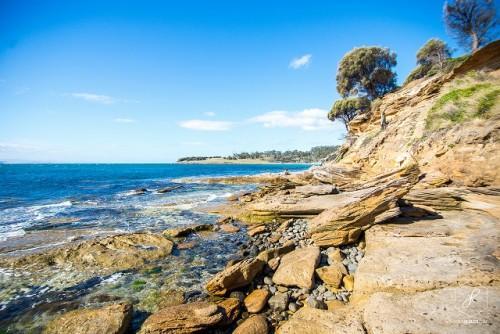 This popular park lies 15 km off the coast 88km north-east of Hobart. It can be reached by a 50-passenger catamaran ferry from the Eastcoaster Resort, which lies between Orford and Triabunna.

The island is a unique amongst Australia's national parks, with both spectacular scenery and a fascinating history. Maria Island was actually the first penal colony established in Tasmania, in 1825. By 1828 there were 145 convicts, but due to the success of Port Arthur, the settlement was abolished in 1832. After another ten years, a convict probation station was established at Darlington. Five New Zealand Maoris were imprisoned from 1846 for "open rebellion against the Queen". One died there and in 1988 his body was exhumed and taken back to New Zealand. After the prison era, an Italian entrepreneur set up first a wine-making and silk industry and then a cement works all of which eventually failed.

Maria Island is well-known for its abundant animal life. It is the only national park in Tasmania where all 11 state's endemic bird species can be observed. The endangered Cape Barren goose has thrived here. There are a number of fascinating walks, and the local limestone is studded with fossils.

Facilities on Maria Island are basic. There are no shops. Limited accommodation is available in the Penitentiary Units. These are often booked six months advance. There are some camping areas.