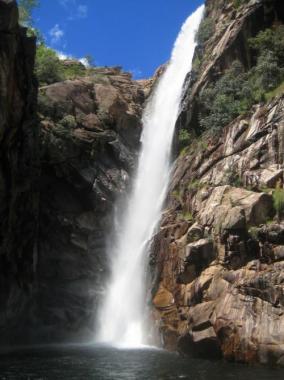 Some 250 km east of Darwin, Australia’s largest national park joined Unesco’s World Heritage Area list in 1987 on account of the Aboriginal art sites it contains and its almost unbelievably rich and varied wildlife.

Kakadu extends over a number of very distinct landscapes. The tidal zone along the shore of Van Diemen’s Gulf is pierced by the estuaries of four great rivers, the East, West and South Alligator Rivers and the Wildman River. Here the grey of tidal mudflats contrasts with the bright green of mangrove swamps, breeding grounds for the well-known barramundi. The floodplains of the rivers become a vast freshwater sea in the Wet, teeming with migratory birds and other waterfowl, including magpie geese, kites, egrets, brogues, pelicans, cormorants, ibises and the handsome jabiru. Salt and freshwater crocodiles lurk in creek and billabong. As the land rises gradually southwards, eucalyptus woodland develops, interspersed with myriad termite mounds or dramatically interrupted by massive rock outcrops, isolated fragments of the formidable sandstone escarpment marking the western edge of Arnhem Land. This rugged north-south barrier runs for 500 km, broken by gorges cut by the streams draining the vast interior, the scene of spectacular waterfalls in the wet season. Two of the best known of these are Jim Jim Falls and Twin Falls, in the south of the park, both with abundant tropical wildlife.

Scores of natural galleries in the escarpment sandstone contain some of the country’s choicest examples of nearly Aboriginal art. The most visited are those at Ubirr, where there are ‘X-ray’ paintings as well as other styles, and at Nourlangie Rock. The main visitor centre for the park is near Jabiru. It is possible to get some idea of Kakadu in the course of a day visit by air from Darwin.

Discover other local attractions and tourist tours in the Northern Territory today!