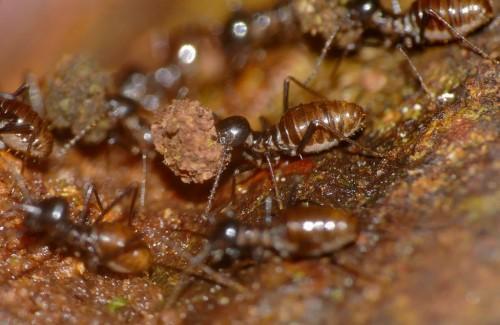 Termites damage more timber in buildings in Australia than all wood-boring insects together. There are more than 200 different species of termites in Australia, but fewer in New Zealand. Most species eat wood or grass, but most of these attack fallen trees and wood in contact with the ground.

Termites usually have a central nest that houses the queen (which lays the egg), the king (which fertilises the queen), the soldiers (which depend the colony) and workers (which tend the queen and do all the work in the colony).

The survival of the species is ensured by the production of sexual forms that become the kings and queens of other colonies which they establish .These sexual forms are winged and are produced inside the nest usually once a year.

When ready to leave on their colonising flight they mass in thousands at small exit holes. They fly when conditions are favourable, usually on a warm, humid evening after the rain. Most are killed by predatory animals, but a few escape and set up new colonies.

Termites are soft-bodied insects and easily become desiccated, so they ensure this by hollowing out the centre of wood.

As a result, there are likely to be no external signs of termite attack. Often the first indication is collapse of the flooring or the appearance in a building of many winged termites during the colonising flight. An inspection then reveals mud tunnels leading from the ground up walls or piers to the wooden structure.

These mud tunnels may be seen crossing brickwork, timber members, ground and fences to reach the wooden structure of a building. Termites build the tunnels to protect themselves from desiccation and predators. Their presence indicates damage to a building, possibly even in the roofing section.

A house should be inspected for termites at least every 12 months, either by pest control operator or by the householder. The entire house must be examined, for termites may be found in timbers.

If you discover termites, collect some of the soldiers – the ones with the darker heads – place them in methylated spirits and take them to entomologist for identification. There are many species of termites that will not attack houses or are easily controlled. Disturbed the termites and their workings as little as possible so that any subsequent treatment will have the fullest possible affect.

Eradicating the harmful species is a task best left to a pest control operator. Amateur have neither the skill nor the equipment for the job, which involves arsenic dust. An insecticide is also applied to the soil to prevent new infestation.

When house is to be built in an area where termites are known to occur, treatment of the soil around the foundations will reduce the risk of infestation. If the house is to have a concrete slab foundation it is essential to treat the soil before the concrete is poured .The insecticides used are toxic to humans as well as insects and their application should be left to an expert.

Where the termite danger is high, it may be preferable to use timbers that have natural resistance to insects – white cypress pine, river red gum, bloodwood, redwood and western red cedar , for instance. Chemically treated woods are immune to termites, borer and rot alike. In New Zealand certain woods such as radiate pine, must be treated for use in building.