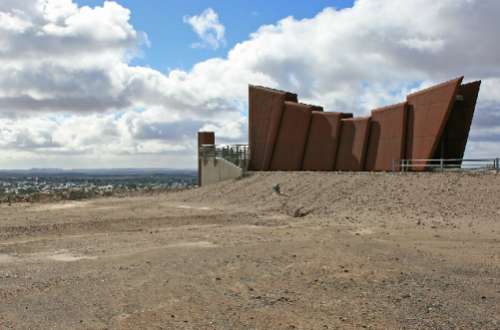 Founded on a 7km lode of silver, lead and zinc, the richest of its kind in the world, the unique ‘Silver City’ faces an uncertain future as rationalisation takes place against a background of low world prices for its products.

Thanks to the water piped in from its recreational reservoir at Lakes Menindee 110km away , Broken Hill is a surprisingly green and leafy spot in what is one of the world’s harshest environments: bitterly cold in winter, intolerably hot in summer, with a negligible rainfall that is only a tiny fraction of the evaporation rate. Nearly dead from thirst, the explorer Sturt gave the humped-backed ridge its name in 1844, but it was not until the 1880s that a German-born boundary rider, Charles Rasp, founded the Broken Hill Proprietary Company which exploited the underground wealth in uneasy partnership with the workforce for many years. Broken Hill has always been a long way from the government in Sydney, and its ties are closer to South Australia, with smelters at Port Pirie, union beaches at Adelaide and clocks that keep South Australian time.

Protected from dust storms by extensive tree belts, Broken Hill is laid out on a grid of streets with names like Chloride, Mica, and Cobalt. The excellent Tourist Information Centre is close to the old Sulphide Street Station, now a mineral and train museum. The Gladstone Mining Museum has interesting exhibits, but it’s more exciting to go down a former mine, like Delprat’s mine or Day Dream Mine. The town is a base for the Royal Flying Doctor Service and the School of the Air, both of which are open to the public. The strange environment of the city and its surroundings seems to have acted as a stimulant to a number of artists, and there are several galleries, of which the best known is that run by Pro Hart.

Broken Hill Proprietary BHP, as it is universally known, had its roots in Charles Rasp’s discovery in 1883 of the immensely rich silver, lead and zinc lode at Broken Hill. It is now Australia’s largest company, having long since diversified out of exploiting the mineral wealth of Broken Hill into iron and coal, gas and oil, and steel-making. Its profits are taken by many as an index of the prosperity of the whole country as a whole.

Silver Screen Silverton about 25km west of Broken Hill is the ghost town of Silverton, whose popular moved to the bigger town when mining became unprofitable here in the late 1880s. With its restored buildings seeming to typify the spirit of the Outback, it has taken on a new lease of life as a stage set for a number of films including A Town Like Alice and one in the Mad Max series.