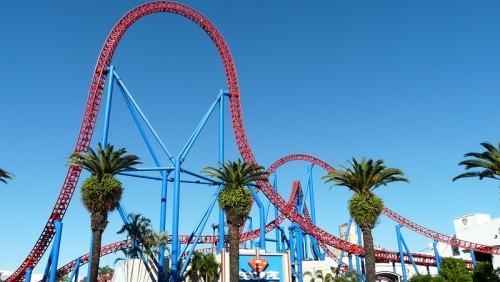 The Gold Coast’s theme parks are a major drawcard for tourists. While they are generally quite expensive, the ticket price usually covers all rides and shows, so for a full day’s entertainment they can be worthwhile and good fun.

Sea World Theme Park located at The Spit in Main Beach is the longest running Gold Coast theme park. The main draws are the animal performances, which include twice-daily dolphin and sea lion shows, and shark feeding. In addition to these are rides including a corkscrew rollercoaster, a monorail, a pirate ship, a waterpark with slides and an adventure ride called the Bermuda Triangle.

Movie World also is known as “Hollywood on the Gold Coast”, is a re-creation of the Warner Brothers film studio in Hollywood, and claims to be Australia’s number one tourist attraction. Warner Bros cartoon characters wander around keeping the kids happy, and there are stunt shows, movie sets, a Batman ride and the Lethal Weapon ride, an inverted, suspended roller coaster that has you spending most of the 105-second ride upside down.

Wet ‘n’ Wild situated just south of Movie World, is a fun water-sports park – probably the country’s best. It has a couple of great raft slides, a twister (in which you pelt down a water-sprayed, enclosed, tightly spiralling tube), a speed slide on which people have clocked up to 70 km/h, and a 1m-wave pool.

Dreamworld, a little way north at Coomera, is a Disneyland-style creation with 11 theme areas, a wildlife sanctuary and various thrill rides including the Tower of Terror, on which you plummet from a height of 38 storeys reaching a speed of 160 km/h.

Take a look at other theme parks and local tourist spots across the Gold Coast Region today!