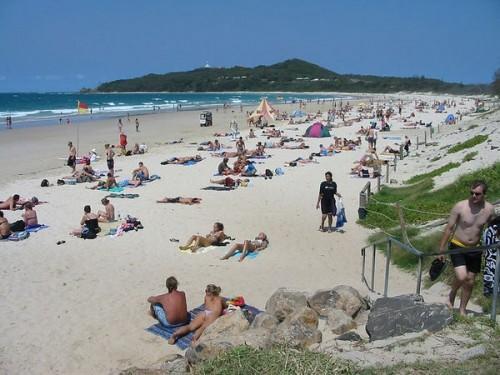 Once upon a time, there was a simple whaling station here. Byron Bay, a surfing mecca and meeting place for alternative cultures since the 1960s, is now one of the most popular spots on the east coast of Australia. Long-term resident moan tourism’s impact, which is understandable since crossing the main street requires fighting bumper-to-bumper traffic all day and night. Nonetheless, the beaches are superb there are great restaurants and cafes, and excellent nightlife and there’s always the lush hinterland to escape to when you just can’t stand the hurly-burly any longer.

Cape Byron was named by Captain Cook after the poet Byron’s grandfather, who sailed round the world in the 1760s. One spur of the cape is the most easterly point of the Australian mainland. Dolphins are frequent visitors year-round and humpback whales pass nearby during their northern (June-July) and southern (Sept-Nov) migrations.

You can drive right up to the picturesque lighthouse (1901), one of the most powerful in the southern hemisphere. There’s a 3.5km walking track right around the cape from the Captain Cook Lookout on Lighthouse Rd. It’s circular, so you can leave bikes at the start. You’ll have a good chance of seeing wallabies and bush turkeys in the final rainforest stretch. There’s also a herd of feral goats, descendants of an early lighthouse of keeper’s flock.

Byron’s glorious collection of beaches ranges from 10 km stretches of empty sand to secluded little coves. Main Beach, immediately in front of the town, is a good swimming beach and sometimes has decent surf. The sand stretches more than 50 km all the way up to the Gold Coast, interrupted only by river or creek entrances and small headlands.

At the western edge of town Belongil Beach had its clothing-optional status recognised in 1997 after local protested by listening to reggae in the buff.

The eastern end of Main Beach, curving away towards Cape Byron, is known as Clarks Beach and can have good surf. The headland at the end of Clarks is called The Pass. You’ll find the best surf of here and at the next beach, Watego’s (good for dolphin-spotting) and farther around off Little Watego’s Beach, almost at the tip of the cape.

South of Cape Byron, Tallow Beach extends 7 km down to a rockier stretch around Broken Head, where succession of small beaches spot the coast before opening onto Seven Mile Beach, which goes all the way to Lennox Head another 10 km south. You can reach Tallow from various points along the Byron Bay-Lennox Head road. The ‘suburb’ of Suffolk Park (with more good surf, particularly in winter) starts 5 km south of town. Another kilometre farther is the turn-off to Broken Head, called Beach Rd. Before the caravan park at the end of this road, Seven Mile Beach Rd (unsealed) runs south behind Broken Head Nature Reserve. From here several tracks lead down through the rainforest to Broken Head beaches - two good ones are Kings Beach and Whites Beach.

After you explore some of Mother Nature’s wonder you can also check other local attractions and tourist destination in Lismore Region today.